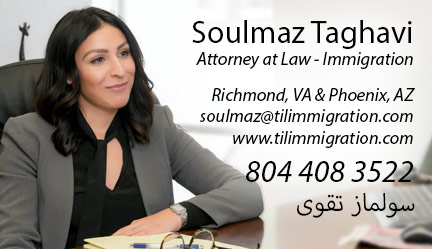 Soulmaz Taghavi is the Principal Attorney and Founder of Taghavi Immigration Law. As a former criminal defense attorney, Soulmaz specializes in removal defense, litigating “Crimmigration” cases. She is a dedicated, passionate, and driven attorney with vast experience in immigration law.

Soulmaz is a long-standing member of the American Immigration Lawyers Association (AILA), and has argued before the Fourth Circuit Court. Additionally, she has had work published in a law journal regarding removal proceedings.

Soulmaz’s family emigrated to the United States from Iran in the 1980s, which in part, helped cultivate her desire to use her education to help individuals and families navigate our legal system efficiently and effectively.

A native of Richmond, Soulmaz, received her bachelor’s degree in International Relations and Economics from Virginia Commonwealth University, and subsequently received a masters degree in Middle Eastern Studies from the University of Virginia. She graduated with honors from the North Carolina Central University School of Law in Durham, N.C. Soulmaz also spent a summer abroad at American University in Cairo, Egypt, where she studied Arabic and International Business.

Today, Soulmaz has immense experience in preparing and filing defensive reliefs and motions before Immigration Courts and Board of Immigration Appeals, including, Asylum, Cancellation of Removal, Prosecutorial Discretion requests, Convention against Torture, I-212(h) Criminal and Inadmissibility Waivers, and I-601A/I-601 Provisional Waivers.

Soulmaz has represented individuals in Individual, Master Calendar and Bond Hearings before various Immigration Courts. She has experience in preparing and filing humanitarian and family-based immigration petitions, applications, briefs, and waivers for USCIS, including Naturalization and Adjustment of Status applications.

Well-versed in state and federal appeals, Soulmaz single-handedly gave oral arguments before a three-panel judge at the United States Court of Appeals for the Fourth Circuit, arguing for procedural due process rights in a contested alleged immigration marriage fraud case in Bassam Hanna v. Loretta Lynch on March 21, 2016.