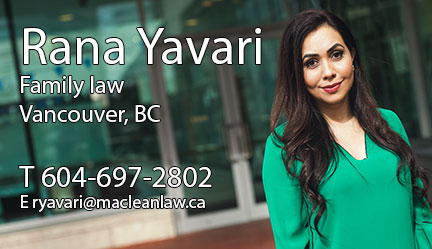 Rana Yavari has a Master of Laws from Peter A. Allard School of Law at University of British Columbia. She earned her LL.B with Honours at the University of London, United Kingdom. She also gained valuable experience in a pro bono law clinic where she became familiar with cases regarding social enterprise, online consultancy, media law and various forms of employment conflicts.

Rana cares about people and is dedicated to helping her clients move forward through her practice of family law. She coordinated case management of community resources, service plans and functioned as liaison with other service providers in supporting newly arriving immigrants to Canada for the Immigrant Services Society of BC.

Fluent in both English and Farsi, Rana Yavari has travelled extensively throughout England, France, Germany, Czech Republic, Greece, Holland, Italy, Spain and Hungary. In her spare time, you can find her at the gym, playing the piano or painting.