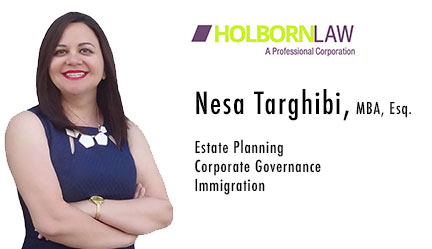 As Holborn Law’s founders and president, Nesa Targhibi is an avid advocate for her clients and a savvy entrepreneur.

Nesa immigrated to the United States with her family at the age of fifteen from Tehran, Iran, and is fluent in Farsi. She obtained a Bachelors in Business Administration from California State University Fullerton and a Masters of Business Administration from the University of Phoenix. After a successful career in business, Nesa pursued her dream of becoming an attorney at Chapman University School of Law where she was offered a merit scholarship. She earned her Juris Doctor degree with an emphasis in tax law in 2013.

In law school, Nesa worked as a research assistant to Professor Marissa Cianciarulo and a law clerk at the Law Offices of Sally Amirghahari. As a law clerk, Nesa gained practical experience in handling a variety of estate planning, immigration, and corporate governance matters.

Nesa’s background is an asset to Holborn Law and its clients. With a business education and experience, Nesa understands her clients’ concerns beyond those of the law. She knows the ins and outs of running a business. This allows Holborn Law to provide its clients with solutions that best account for their needs. Having personally experienced the hurdles of our immigration law system, Nesa possesses the same advantage when working with clients on immigration related matters.