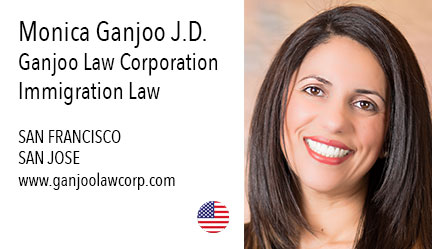 Is this your profile?
Your Free trial has ended.
Upgrade to paid packages and Get Leads.
Upgrade from only $50/month!

Monica Ganjoo, the owner of Ganjoo Law Corporation, graduated from Indiana University with honors in 1996. She obtained a Bachelor degree in Psychology, with a minor in Sociology, and an outside concentration in British Literature. Monica graduated from Valparaiso University School of Law in 2000.

While obtaining her Juris Doctorate degree, Monica worked for the State Prosecutor’s Office, interned for the County Attorney’s Office, and worked for a prestigious private law firm. Monica further studied law in Cambridge, England, where she focused on the British Legal System and International Law.

After graduating from law school, Monica worked for an immigration law firm in San Francisco, where she learned about all aspects of immigration law.

During this time, Monica also taught legal classes at Catholic Charities. In 2001, Monica opened her first immigration law office in San Francisco. She opened her second office in San Jose in 2002.

Monica is a member of the Indiana State Bar Association as well as the American Immigration Lawyers Association.