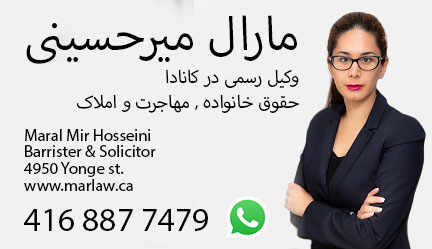 Maral Mirhosseini is a sole practitioner and the founder of MarLaw.

Maral received her Bachelor of Psychology from York University. She then studied Doctor of Pharmacy at the University of Waterloo.

However, her passion for assisting individuals led her to change field into law. Maral obtained her L.L.B from the University of Law in the U.K

Maral articled in the plaintiff side personal injury firm as well as a boutique firm in North York where she was exposed to a variety of areas of law, including: Real Estate, Family, and Wills & Etstates.

Maral opened her practice in 2018 and predominantly concentrates on immigration law.

Fun Facts: Maral is a self-starter and an avid learner. She believes that an individual should continuously learn and shall not limit oneself