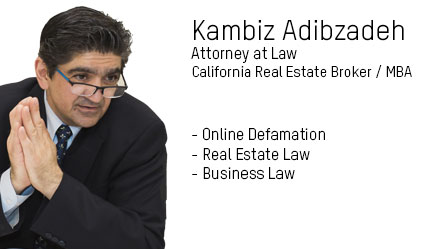 Admitted to Practice in the Following Courts

Mr. Adibzadeh, is a licensed California attorney in excellent standing with the California State Bar. Besides earning his Juris Doctorate degree in law, Mr. Adibzadeh, also earned a Master in Business Administration (MBA), as well as a Bachelor Degree in Aerospace.

Mr. Adibzadeh has a proven track record in exercising sound judgment and the use of proper decision-making techniques for his clients while under intense pressure.

Mr. Adibzadeh, has been recognized as one of the Top 50 Lawyers in America in 2016.

Mr. Adibzadeh, secured a Jury verdict for his client in the excess of $61 Million ( $61,587,000) in a Medical Malpractice case, in California Superior Court, San Diego (Case: Asbaghi v. Nydiggar et. al. Case Number 37-2013-00066639-CU-PN-CTL), which has been recorded as the largest jury verdict in San Diego history and the fourth largest in California overall in 2016.

With the explosive nature of internet, many individuals and companies are falling victim of being defamed or bullied online. Mr. Adibzadeh also has represented clients with matters related to Internet law and online defamation.