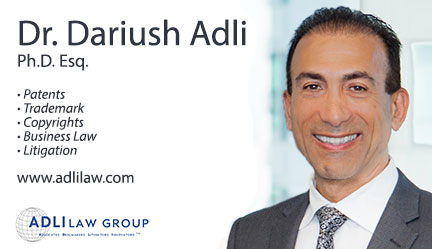 The reason is clear; for over two decades, Dr. Adli has successfully counseled and represented U.S., Asian and European businesses, from Fortune 500 corporations to startup companies, in intellectual property and business matters. In 2010, after years of successful practice at big law firms, Dr. Adli decided to act on his vision of offering clients the “choice combination” of high-quality work product, typical of bigger U.S. law firms, and the ready access and more affordable fees typical of specialized boutique firms.

This vision gave birth to the success, which is ADLI Law Group, P.C.

Dr. Adli is well recognized as a premier strategist in patent, trademark, copyright, trade secret and complex commercial disputes and is widely sought after by businesses large and small, seeking effective strategies for protecting their valuable intellectual property assets.

In that effort, Dr. Adli partners with businesses to identify their protectable intellectual property assets and to develop customized legal strategies, which are consistent with the businesses’ goals, resources and risk tolerance.

Dr. Adli has a deep understanding of science and technology. He has a bachelor’s degree in physics and mathematics and master’s and Ph.D. degrees in Nuclear Engineering from the University of Michigan in Ann Arbor.

After a few years as a scientist/engineer at a top engineering consulting firm in the Boston area, Dr. Adli decided to pursue a career in law and enrolled in the J.D. program at the University of Michigan, graduating in 1998.
Dr. Adli has first chaired numerous trials in intellectual property and complex commercial matters at federal and state courts, the International Trade Commission (ITC) and in arbitration proceedings.

Successfully represented wind turbine startup company against competitor in a patent infringement action to a highly favorable claim construction ruling by the court.

Counseled clients in patent and technology assessment and portfolio analysis, strategic planning, and the development of policies and programs for protecting confidential information.