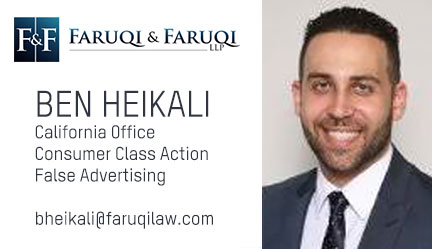 Ben Heikali is a Partner in the firm’s Los Angeles office. Ben’s practice is focused on litigation in consumer protection and false advertising claims.

Prior to joining F&F, Ben interned at the U.S. Securities and Exchange Commission, Division of Enforcement, focusing on municipal bond litigation and financial fraud work.

Ben graduated from UCLA School of Law. During law school, Ben was awarded the Masin Family Academic Excellence Award for outstanding performance; and the American College of Bankruptcy Law Meet, “Best Term Sheet.” As well, Ben served as Staff Editor of the UCLA Entertainment Law Review. Ben received his B.A. in Psychology, with honors, from University of Southern California.

Ben is licensed to practice law in California and is admitted to practice before the United States District Courts for the Central, Northern, Southern, and Eastern Districts of California.