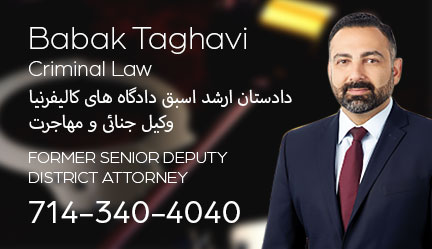 Mr. Taghavi received his BA Degrees in Psychology and a BA Degree in Criminology from the University of California Irvine in 2003. He worked in the Central Justice Center as a misdemeanor deputy from 2007 to 2011, where he tried 33 misdemeanor cases and conducted over 50 preliminary hearings on various felony cases.

During his tenure in the Sexual Assault unit Mr. Taghavi tried 16 jury trials and combined with plea agreements Mr. Taghavi secured sentences of over 20 people to life in prison and several more for sentenced exceeding 25 years in prison.

Mr. Taghavi also worked in the Special Operations Unit where he handled the felony murder re-litigation as well as reviewing officer involved shootings; TARGET-Gang Injunction unit where he prosecuted enjoined gang members and in the Juvenile Justice Center where he handled sexual assault cases with juvenile offenders.

In his time as a prosecutor Mr. Taghavi handled numerous high-profile cases that received media attention on both a local, state, national and international level. (See cases in the news)

In his career Mr. Taghavi had tried in excess of 70 civil and criminal jury trials to verdict, numerous court trials in both Juvenile and Adult court, handled in excess of 100 preliminary hearings, as well as many other various motions.

Mr. Taghavi was selected to train many different police agencies as well as law enforcement organizations and police academies in sex assault investigations, search and seizure, confessions and admissions as well as trial testimony.

Mr. Taghavi was also a regular faculty member of the Orange County District Attorney’s training unit where he trained prosecutors on a wide variety of topics including handling of Misdemeanor cases, Trial Advocacy, Marsy’s law and Restitution hearings.

He was an adjunct faculty member at Cypress College teaching legal aspect of forensic examination for forensic computer examiners, taught Trial advocacy at JSerra High School as well as volunteered at multiple other high schools over the years in teaching trail advocacy.

For over 5 years Mr. Taghavi was a regular speaker at the Wayfinders Victim Witness training program as well as a guest speaker at legal classes in Cal State Fullerton, Whittier Law School and Western Law School.

Mr. Taghavi is a former President of the Association of Orange County Deputy District Attorney’s, a member of the Civic Action Committee of the AOCDDA.

Cases in the news: