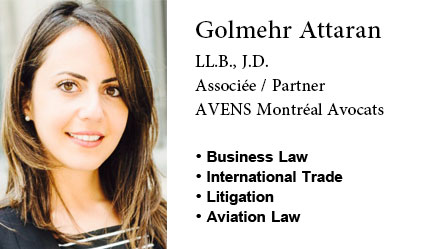 Golmehr is a corporate lawyer based in Old Montreal, leading a practice focused in business law. She advises Small-Medium Size Enterprises with their M&A, franchises, joint ventures, partnerships, conventions, as well as their litigation matters.

Over the past few years, her practice has been focused on start-up businesses, purchase of enterprises, and shareholder litigations.

Golmehr has contributed articles regarding legal matters to a local newspaper and has given conferences to groups of professionals regarding corporate law.

In 2011, Golmehr was called to the Quebec Bar, and in 2013, she qualified for the Law Society of Upper Canada. She is fluent in English and French and speaks Farsi.